We did it! We moved! Our old house is sold and we now officially live in my childhood home. We seem to be all in one piece and we think we have most if not all of our belongings here with us. I’d call that a success! The first round of renovations are all finished up but we are realizing how many little projects there are that we’d still love to do. Realistically a whole lifetime’s worth. So as much as I would love to have a big TA-DA post where I show the entire house totally finished in all its glory, that’s not about to happen anytime soon. We still have art to hang and rugs to acquire. Tiling work that I want to tackle myself and lots and lots of painting. The house is definitely a work in progress and will stay that way for quite a while I’m sure, but even with all the items still on the to-do list it feels SO much different than where we started, so I thought now would be as good of a time as any to share some shots of the downstairs.

The kitchen probably underwent the most change. New flooring, appliances, lighting and countertops were installed by the contractor plus the cabinets got a new coat of paint and new hardware that Ben and I did ourselves. It’s so much lighter and airier and it’s amazing what an extra foot of perceived head room (thanks to the removed fluorescent fixture) will do for the feel of the room. It seems so much taller! 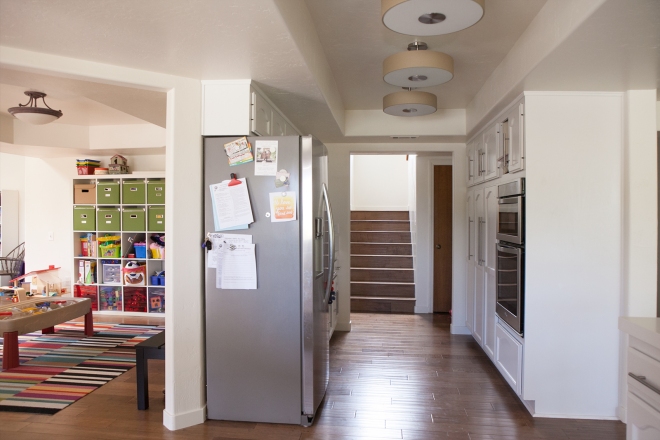 There are a couple of places where the changes didn’t go exactly as planned – we were hoping to get out as much of this small wall with the arched opening as possible, but it turned out that between the framing and electrical there really was only a tiny bit that could go. In the end it didn’t end up being that big of a deal, plus the view is totally transformed by the windows anyway… so who’s looking at that little sliver of wall? Not me, that’s for sure. Up in the top right corner of the frame you can see a sneak peek of one of our future projects – removing the giant 1980’s (90’s?) surround sound speakers.

Second to the kitchen, the dining room had the most work done on it, and it also feels the most changed to me. Everyone who has seen the new windows has commented that they can’t believe they weren’t always in the house. It just seems like they were meant to be, right? And since it really doesn’t get very hot at this house (save for the mega September heat wave we just went through, yikes!) we decided that a big pendant light would be an improvement over the old brass fan. I know it’s not everyone’s cup of tea, but I love it. Turning this room into a dining room was something I wanted to do from the moment we decided to move, and I’m so completely in love with how it turned out. We are on the hunt for a giant (and hopefully brightly colored) rug for under the table since the one currently in the room is both totally destroyed by kids and a few feet too small (did I mention the buyers for our old house also bought our dining table and the new dining table we got for this house is HUGE?!) 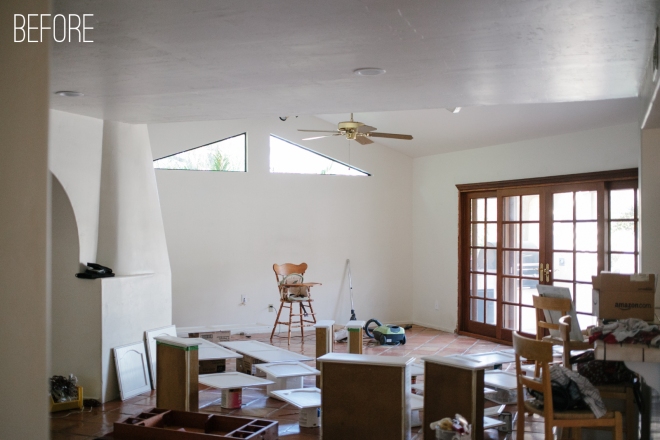 I’m completely in love with the widened opening between the kitchen and playroom, but I have to admit that this before/after is a little weird. When I took the before shot we hadn’t decided on a furniture layout and I thought it would give a good view of the living room. Instead it’s all couch. But hindsight is 20/20, right? Since we can’t go back and re-take the before you can just focus on how awesome the kitchen and dining room look through this big new opening. Ahhhhhh. I just sigh a happy sigh every time I see through into the rest of the house. And I love that we have reclaimed this formerly vacant space (a formal living and dining room really only used at Christmas) as our daily hub of family activity. So much of our time is spent in the playroom and I can also keep an eye on what’s going on in there while I’m cooking dinner. It’s perfect! 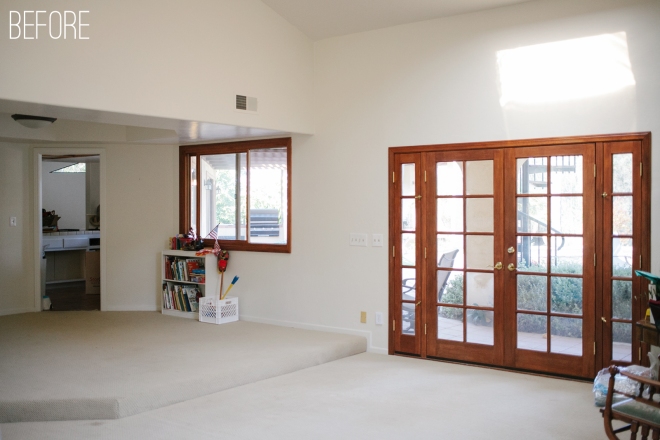 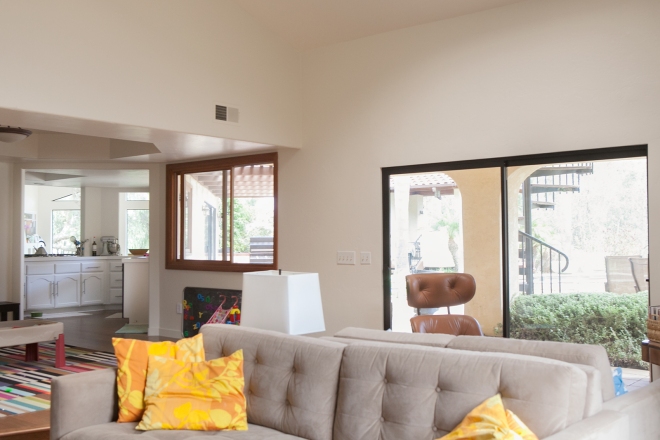 And if we’re talking about hindsight and before shots that should have been, I really wish I had a before shot from this angle. It’s one of the most changed in the whole house – new kitchen, new opening to the playroom and lots of beautiful new light brightening the whole space thanks to the big windows behind me. It makes me so ridiculously happy to see this every day.

So there you have it – the downstairs tour of our newly renovated (but still very much in progress) home. I really can’t believe we get to live here… I’m still pinching myself and wondering when I’m going to wake up and realize it’s all a dream. The house still has so much of that nostalgic childhood home feeling that I love about it, but it’s also feeling decidedly more US as well. It’s going to be so much fun to keep putting our time, energy and ideas into this house and see it change. Home, sweet home!