Friday was Ben’s birthday and I just cannot let a birthday pass without baking a cake. Unfortunately for me all of my most favorite birthday cakes have two things in common – 1. They are baked on sheet trays and 2. They contain buckets and buckets of butter. These two traits are a problem because 1. Our new house (while super fabulously amazing) has a doll sized oven. Ok… maybe a bit larger than doll sized but it doesn’t hold my sheet trays (boo hoo! I cannot wait until we can put in a massive oven in a few years!) and 2. I am currently not eating any dairy since I’m nursing a baby with a milk protein intolerance.

I started searching around on a few of the blogs that I read for a dairy free cake (because it doesn’t have to be *vegan* just dairy free… I can still have eggs) and didn’t find any that tempted me but I DID find this cake which looked simply amazing – Forgiving Martha’s vanilla buttercake with strawberry icing. I had first seen her blog thanks to a facebook post by a friend for her chavocado pudding (and yes, it sounds weird but it is delicious as well!) and knew that she posts a lot of vegan recipes… but this butter cake was anything BUT vegan (hello, butter!) I decided to try it anyway, using earth balance (a butter substitute) and just following the rest of the recipe exactly. The batter actually reminded me a lot of the batter for my favorite sheet tray but I was skeptical as to how it would turn out. Ben suggested we test out the convection setting on our oven (hey, at least if it has to be tiny it’s somewhat fancy) and to my shock and amazement the cake cooked perfectly evenly all the way through. It was also not too dense or too dry… just simply delicious! Mmmmmm.

I tried to make the frosting as well (because it looks SO good) but let’s just say that the earth balance and strawberries did NOT want to mingle. No matter what I tried I couldn’t get an emulsion out of them, just a gloppy mess. Maybe it was my fault and the temperature was off, or maybe it’s just a fact of using a butter substitute but, but that whole batch went straight to the trash can. I decided instead to make a variation on the icing I’d made for Ben’s birthday cupcakes for work earlier in the week (mmm cupcakes). It’s a recipe for vegan chocolate mint cupcakes but I altered it to be an almond icing – substitute almond extract for mint and leave out the food color. This kind mixed up much much better.

The effect wasn’t quite exactly the same (no fluffy pinkness in the icing) but still pretty mouth-watering if I do say so myself. Mmmmmmm cake. I’m glad that even with a tiny oven and non-dairy requirement I was still able to make a tasty cake 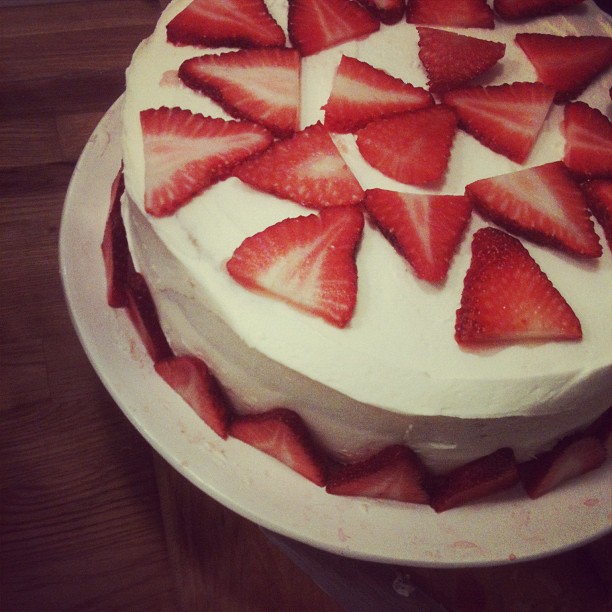